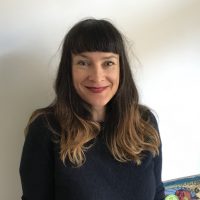 Elodie is a native of France and spent her earliest years between Normandy, Brittany, New Caledonia, and Toulon. She went on to complete her Bachelor’s and Master’s degrees in English Language and Civilization in Angers as well as a Master’s in French as a Foreign Language (Angers/Paris) before moving to the US to begin her international teaching career.
Elodie’s nearly 20-year career in French-language education spans nearly all levels and brought her from France to the United States, where she has worked at the International School of Louisiana in New Orleans, l’Ecole Française du Maine, and most recently the North Seattle French School in Washington State. In addition to teaching, she has created and coordinated adult education programs; led DELF certification programs; and curated monthly Ciné-Club film and discussion series. As well, Elodie has spent the past several years as a school director from 2016 until 2019 when she moved to Amsterdam.
Elodie loves teaching all ages and has been described by her students as lots of fun but also demanding. She loves using “gestures” and drawings and making her class full of energy! When she does not teach, she loves to explore Amsterdam with her husband Andrew and their son Isidore!