In June 2016 L’école de français was created by two friends, ex-colleagues and both teachers sharing the same values and ideas on how to teach French. In 2020 Céline took over alone the direction of the school.

We offer services as close as possible to the needs of those who wish to learn or improve their skills in French. In individual or group lessons (maximum 8 students), taught by native teachers, it is about learning in French even for beginners while having fun.

With its innovative language and education program, L’école de français has the ambition to make French lessons accessible to all ages, levels and ways of learning

Céline is French, she is Parisienne born and bred and spent all her life in Paris until she decided to see what life is like outside of France. At l’école de français she divides her time between giving courses, directing the business, communication and partner relations. She’s also the one who remembers to buy new printer ink cartridges.

Born in Paris, his parents gave him a curiosity about art, history, sport and food culture. During his studies at La Sorbonne in the French capital, he spent a lot of time in museums, galleries, cinemas, restaurants and theatres. Alexandre holds bachelor’s degrees in history and law along with a Masters in Europe’s International Relations, a Masters in International and Strategic Affairs, and an Associate Degree in Language and Culture. History and geography gave him the passion of traditions, civilisations and the desire to travel and understand languages and cultures.

Amélie grew up in a multicultural environment with an Italian mother and a father of Polish origin. She was born in Aix en Provence in the south of France, surrounded by the Calanques. She spent her teenage years in Bordeaux. Amélie is passionate about history, art and the cultures that surround her.

Freshly arrived in Amsterdam, I am an artist and had the chance to do numerous exhibitions around the world, in places like Mauritius, Paris, Tahiti and Singapore. I have been teaching Arts in Primary & Secondary schools for more than 20 years now. My favourite word is "creativity", behind this word is great freedom and the development of self-confidence. My workshops are invitations to enthusiasm, wonder, and to realize one's own creative spirit to its full potential. The objective is to express yourself freely, in a playful way in the various subjects proposed.

Elisa is a French teacher from Normandy. She graduated in French language and literature, obtained her CAPES and taught for several years in France before moving to The Netherlands. As she followed her lover, she fell in love with Amsterdam and now enjoys teaching French to young and old alike, whether they are native French speakers or new to the language. Besides teaching, Elisa loves travelling, watching movies, reading books and last but not least going to the museum.

Hanna was born in the Netherlands and grew up in the French Alps. She learned French in school and spoke Dutch at home.

Born and raised in the Paris suburbs for the first half of her life, Juliana then moved to Normandy with her family, where she grew up amongst cute villages and fields filled with cows (she still doesn’t like smelly cheeses like camembert though) Later on, she moved to Strasbourg for her studies and discovered the beautiful Alsace region and the Alsatian dialect. She holds a Bachelor of Languages and Multiculturalism and studied Dutch at the university. When her teacher told her that one of the queens of the Netherlands was called Juliana, she decided it was time to see this country for real. Therefore she moved again, this time to Amsterdam, within the ERASMUS exchange program. She immediately fell in love with the city – and with a French man she met during Dutch classes (true story) – and never left! That was 7 years ago, and she has been in love both with the Netherlands and her French man since then.

Margaux was born and raised in Perpignan, in the south of France. She studied at the Paris-Sorbonne University with a Master’s degree in French language and received her teaching diplomas (CAPES and Agrégation of French literature). She then taught at various schools in the Paris area, where she shared her passion with French and non-French speaking students. Eager to discover new languages and cultures, Margaux fell in love with the Venice of the North (along with a tall Dutchman!), where she just moved this year. Energetic and positive, she is happy to share her love of the French language and follow the progress of her students, old and young alike. Besides teaching, she loves going to the movies, museums and rock’n roll shows.

Margot was born in the South of France and she lives in the biking country for a few years already. Always passionate about Arts, she got her diploma at the Gerrit Rietveld Academie. While studying she knew she wanted to work with children next to her art practice.

I grew up in Normandy and very quickly developed a passion for literature and foreign languages. After my degree, I taught in Paris for two years and was in daily. contact with multicultural settings. I am also a great lover of Europe and I wanted to go on an adventure! With my partner, we decided to move to Amsterdam during the summer of 2021. I am passionate about art and theatre. I know the museums of Paris like the back of my hand. I love to be able to make culture fun and accessible to everyone, whatever their language level!

In July 2015, Natacha moved to the Netherlands and since then she adores the country and the city of Amsterdam. In France she worked for 8 years as a schoolteacher at various schools in Lyon and surroundings. She was formed at the Conservatoire d’Art Dramatique in Mons (Belgium) where she also worked as an actor, theatre instructor, and president of the theatre group she established together with her husband.

I grew up in Strasbourg, where I completed my Language Degree (English, German, Dutch). I then went travelling for a few months, and afterwards, I became a French assistant in a school in Amersfoort. During this year, I was able to consolidate my skills in Dutch and fell in love with this country and its people. Later, I completed my Master's degree in French as a Foreign Language at the University of Montpellier, and I had the opportunity to work as an intern at L'école de Français in 2020 which allowed me to meet this wonderful team and structure, where I now have the chance to teach online from France.

Sabrina is a qualified teacher in French and English. She was born in Auvergne region and has lived in different parts of France as well as in Ireland and in the United Kingdom. She holds a Bachelor in English studies and Teaching French as foreign language. She also holds a Master's degree in translation and another one in TESOL and education and language policies. She received her teacher certification by the French Ministry of Education in 2010, and specialised in English language and French literature. She has taught since, in upper secondary schools in France, and at primary and lower secondary levels in Amsterdam. She has mainly taught French as a foreign language to newly arrived pupils from abroad, through organisations and as part of an inclusive school program. She is passionate about languages and technologies.

Hello, my name is Solyse. I studied Foreign Languages and International Trade. I lived and worked in several countries : England, Spain, Italy and New Zealand. In 2020, after 3 years spent in France, I decided to move to Haarlem wishing to find a job involving French culture, cultural activities and contact with children. I started working for a French Foundation in Haarlem in September 2020. I love this job. And I was hoping to find something similar in Amsterdam. I like the idea of learning French in a fun way ; with games, songs, etc. I have always had a good contact with children. I like playing with them, doing manual activities, singing, cooking and more.

Sophie was born in Perpignan and grew up in a small mountain village in the Languedoc region at the Spanish border. Three years ago, she moved to Brest in Brittany after having lived in Toulouse for 8 years, which she calls her second home. Sophie also lived in Okinawa, Japan, for a year. There she obtained her degree in “Français Langue Étrangère” (French as a second language) and taught French to a diverse and international public. In her classes, Sophie likes to make use of popular culture, interculturality and a playful way of teaching. Concretely, this means the use of videos and various games. With her humour and enthusiasm, she brings a pleasant vibe to the class. Apart from teaching, Sophie likes drawing and travelling.

Vincent is our drama teacher. Although he is a drama teacher first and foremost, he has been working in the theatre business as a comedian and scenarist for more than fifteen years. 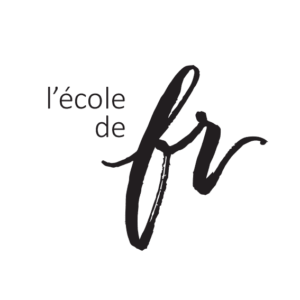